Card Games for the Road 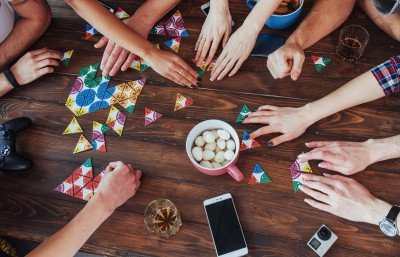 One of the best things about board games is the fun, competition, and memories you make while playing them with friends and family. The only drawback is that they’re typically not very portable. Can you imagine trying to fit Scrabble in your backpack?! Card games are great to pack when you’re short on space and are just as fun as popular board games.

This card game is popular among the Pennsylvania Amish and Dutch community, but all families will find this game fun. It’s fast-paced and the objective is to score points by playing as many cards as possible from your “Dutch Pile” through emptying the “Blitz Pile” as quickly as possible. The game is similar to Speed but uses a specialized deck that adds a little variety to the standard card game. This is a 2-8 player game.

Monopoly fans will love this card game alternative. This is similar to the board game where players try to collect three complete sets of cards representing original properties, such as Park Place and Boardwalk. Each person collects their sets by playing cards they’ve drawn from the deck and stealing them from other players. The twist in this card game are the special action cards including Sly Deal, Deal Breakers, and Just Say No. The best part about Monopoly Deal is that you don’t have to hassle with all the Monopoly money. There are only 20 money cards in the deck which makes managing your stash easier!

This popular game is perfect to take on the road, and you may be surprised by the number of people who are unfamiliar with the game. The game was originally proposed as a Kickstart and has even grown to have an expansion pack. It’s a game that can guarantee a healthy balance of laughs and strategy. The object of the game is to avoid the Exploding Kitten when it’s your turn. A variety of cards are included in the deck to help you avoid losing and nudge other players toward the explosion. Since it’s designers are creators of The Oatmeal, the card images are hilarious, unique, and cheeky. A NSFW version is also available and packed with extra fun!

If you love food and games, Sushi Go! is the game for you. This is another fast-paced game where you are eating at a sushi restaurant and trying to grab the best combination of sushi dishes. The game fits easily into 20 minutes and is easy to learn. It’s essentially a “draft and pass” game that challenges you to keep your eye on the goal while making clever plays and nasty blocks!

If you’re into the classic card games, playing cards are always an option. War, Go Fish, Cribbage, Spades, and Spit are great ways to have some fun and pass the time!