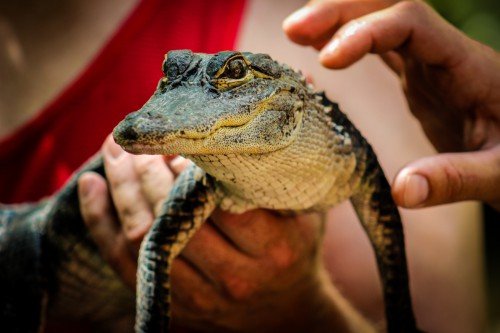 What comes to mind when you think therapy animals? If you’re like me your first thought was a beautiful soft golden retriever with a cute blue vest sitting calmly next to its owner. Hours of training having gone into making him behave so well, ready to help his owner at a moment’s notice. The last thing that would come to mind is a scaly alligator with razor sharp teeth! That is exactly what a man brought into a community center, a 4.5-foot-long alligator on a leash.

I think you have to be a special person to be able to live with alligators in your home. Joie grew loving to live on the dangerous side. He started out riding hogs and bulls, two animals that could potentially be very dangerous. He also spent time handling venomous snakes and other dangerous reptiles. When the chance to adopt an alligator, he didn’t even bat an eye.  It’s like his whole life had been in preparation for this.

Developers in York Town were going to be developing land that was covered in gators. The plan was to relocate them, but that fell through. That is when Joie came into the picture. His friend was trying to find places for all the alligators to go before they were all put down. It wasn’t a hard decision for him he brought his 14-month-old 1.5-foot-long new pet, Wally, home.

Just like any other animals Wally needed to be trained. He was obviously a little wild and slightly aggressive as he got used to living in a house instead of a swamp. In the beginning, he had to feed him from a distance and wasn’t always able to hold him the way he does now. It took time and patience for Wally to get the point that he can be walked around schools on a leash. Joie’s experience with other reptiles and wild animals helped him in the process of domesticating his pet alligator.  Wally now lives happily in the house, laying on the bed and making a nest in the cabinets and watching the TV like a real member of the family.

As Wally grew, he became more domesticated to the point of Joie trusting him enough to take him to schools and other community centers to put on programs. During these visits, he noticed that Wally had a calming effect on some of the children and began looking into the requirements and what he need to get Wally certified as a support animal. Click here to read the full amazing story of Wally the Emotional Support alligator.

I don’t think I will be on the lookout for a pet alligator anytime soon, but it’s nice to see that others are able to care for those animals that don’t have a great future in the wild. The next time you see an alligator maybe you will be able to see them for the loving support animals that they can be, or you may still want to run away in fear like me. Either way it’s nice to see a person and animal helping each other!